Prior to 1996 no comprehensive infrastructure planning or maintenance plan was in place.

Since 2001, nearly $90 million of capital spending and infrastructure projects have been undertaken and millions of dollars for those projects came from grants and other incentives rather than taxes.

In 2017 The Village Board was presented with a staff-prepared plan to repair or replace the Village’s roads and water mains over a 10-year period.  This plan was prepared over several years in accordance with best practices.  Unfortunately Mayor Bass, with support of his contingent, delayed the implementation of the plan – potentially costing the taxpayers millions of dollars of the life of the plan.

In the minutes from the infrastructure workshop, Trustee Cope is quoted saying “we should reduce water rates and increase property taxes to pay for bond issue.” The minutes also reflect that the Infrastructure Plan was prepared by staff and engineers over many months, and were not created by the ad-hoc committee as Mayor Bass suggests.

All but one playground has been replaced, two miles of recreation paths were installed including the Touhy Overpass, and the parking lot and amphitheater were installed at Centennial Park.

Thousands of feet of water and sewer lines have been rebuilt or replaced and a comprehensive maintenance plan has been put in place to keep the sewers operating at maximum capacity.

The Alliance enacted the first major storm water management plan in the Village’s history, using a surface storage system; thereby achieving great  benefit from a low cost option.  This plan has been challenged relentlessly by Trustee Cope who has single-handedly delayed the completion of this project for years.

Alliance Party Board Members brought Lincolnwood into a fiscally responsible and successful position over the previous 20 years which has resulted in the ability to navigate the difficult times we are now faced with.

Lincolnwood benefitted from a strong economy from 1991 to 2006, seeing record property value increases and a flurry of new home construction to replace smaller homes built during the 40s and 50s. The Lincolnwood Town Center was developed, Village Hall, and the pool were built, Village officials saw to it that we have our own fire department, and Loeber and Grossinger built huge businesses. Generally, things in Lincolnwood were going well.

Due to outside economic factors Lincolnwood has endured reductions of as much as $1.6 million annually in sales taxes since the peak in 2007.  From 2016 until the start of the COVID era the Village enjoyed one of the most robust economic periods in modern history.

With careful planning and management we were able to secure the financing necessary to initiate the first phase of the 10-year infrastructure improvement program with zero property tax increases.  Despite the difficult situation we are faced with, Alliance Party  efforts have made it possible  to continue the implementation of the plan and achieve savings due to the favorable financing and construction climates.

We believe in professional management and responsible budgeting. The budget process instituted under the Alliance Party is comprehensive and we leave no stone unturned. We typically receive awards for excellence and carry an excellent credit rating.  Prior to Mayor Bass the Village had obtained the highest possible credit rating but since then it has been downgraded.

With the recent retirement of the Village Finance Director it is more important than ever to have strong leadership.  Institutional knowledge gained from experience is invaluable and the ability to manage the budget process is one that requires both.

Our candidates are business owners with degrees in finance and civil engineering, extensive real estate and construction experience, and first hand knowledge of our Village budget and processes.

Our candidates combine to bring a wealth of knowledge in the areas of public infrastructure, public finance such as grants and TIFs, bidding and contract negotiations, and organizational management.  They are ready to do the work of the Village.

When the recession of 2008 caused significant revenue reduction to our Village, spending cuts were essential. Staffing levels were reduced and the organizational structure of the Village personnel was revised to gain efficiency without sacrificing service. Staffing levels remain below 2008 levels without any reduction in service level.

We are now in a new era of economic challenges and we will use the planning and experience we have gained over the years to guide us again.

The Comprehensive Annual Financial Report (CAFR) shows that after personnel, the biggest expense for the Village is capital improvements to infrastructure and equipment. Roads, sidewalks, water mains, sewers, streetlights, fire trucks, snowplows all require maintenance, repair and replacement on a constant and ongoing basis. Alliance Board Members established long-range planning of capital improvements (Capital Improvement Plan) and, because of this effective planning, Village staff have been able to manage myriad projects using existing revenues together with bonds and grants without having to raise residents’ property taxes above the consumer price index.

We have led the Village to pay off all general fund debt and have a credit rating of AA2 as a result of our careful management of resources (down from Aa1 prior to the Bass era).

We believe in planning.  Prior to 2017 the village board engaged in strategic planning efforts on a regular basis.  With the use of professional direction our efforts served the village well for the prior 15 years.  The collaboration of a well-prepared and guided staff and board resulted in establishment of many policies and directives that helped to move the Village forward.

Mayor Bass, with the help of trustees Nickell and Cope, dismantled our professional organization and did not provide the needed leadership to continue the planning culture.  Trustee Nickell was charged by Mayor Bass with taking on strategic planning efforts by creation of a new committee.  The new committee, without preparation, engagement, and focus, proved to be ineffective.  It was only after failed attempts to hold such meetings that trustee Nickell accepted the village manager’s suggestion to have a professionally managed process of strategic planning.  Unfortunately, prior to undertaking the planned effort the COVID era began since it has been on hold.

Public safety is the most important responsibility of the local government.

Our candidates work closely with and support our police department wholeheartedly.

Alliance Board Members continue to encourage the Village to increase funding to the pension fund to minimize the shortfall that we inherited from the opposition.

Our candidates support common sense crime prevention: lock your doors, install and use outside lights and visible cameras, and other tools for crime prevention. We do not support the installation and use of Village-wide video monitoring because we believe in the personal privacy protections of the Constitution of the United States of America, because we stand firmly for residents’ right to privacy, and because research shows cameras to be ineffective in crime reduction.

We encourage residents to start up neighborhood watches on their blocks and we support subsidizing street lamps installed by homeowners to improve visibility at night.

We advocated for and implemented the addition of miles of new sidewalks and streetlights along McCormick, Touhy, and Devon where they never existed before.

Alliance Board Members’ push to install red light cameras at Touhy and Lincoln has resulted in substantial reduction in crashes at this very heavily traveled intersection.

The era of the Hyatt Hotel (by then called the Purple Hotel) came to an end as the 2008 recession was beginning and the vacant site has been seen as an albatross for the Village.

This property has not generated much revenue for Lincolnwood historically. Fiscally, we have been fine without it being built up as the Village had not yet adopted a hotel tax until after the Purple Hotel was closed.

The Village worked dutifully to approve a new development for the site but the developer failed to complete the project. 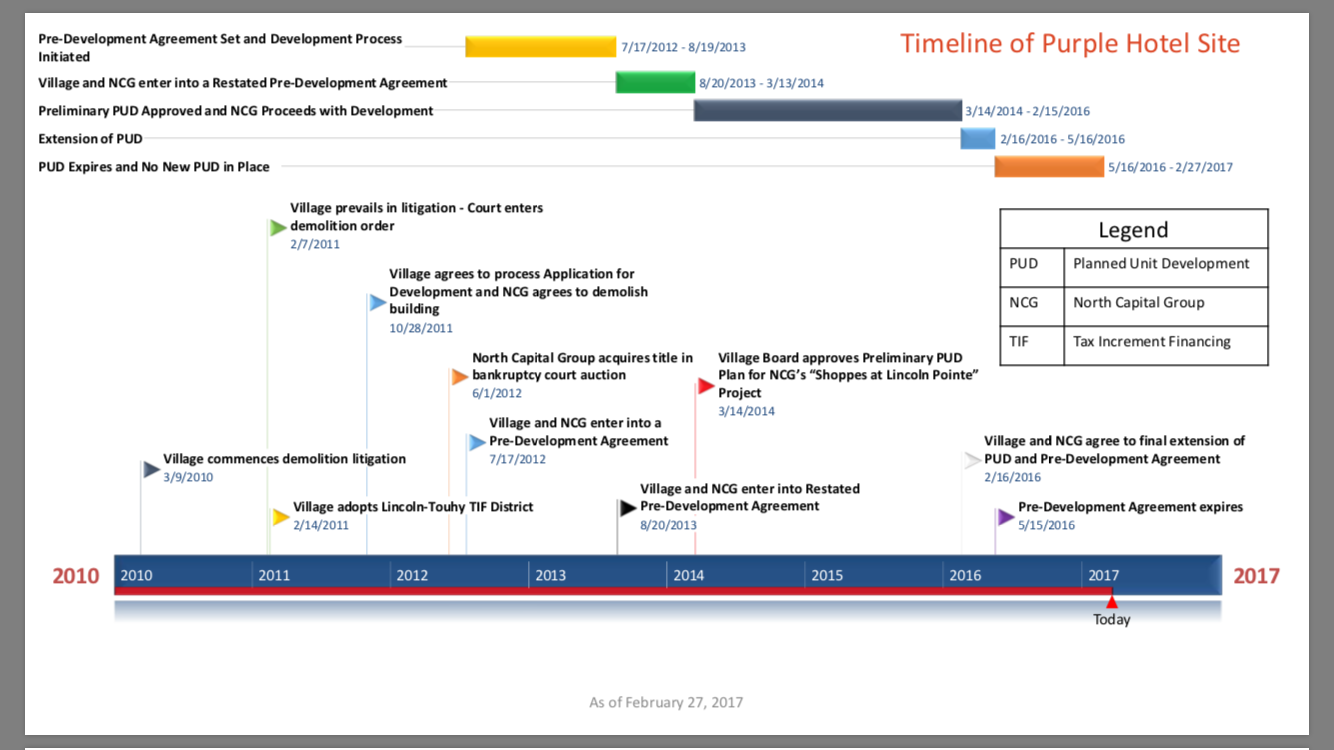 Trustee Patel was one of the Alliance Party members who worked to develop the concept plan for the property in 2016. This was the first time that any Village Board showed support for a residential component. The Board endorsed this plan unanimously.

The auction and foreclosure process itself took time (from January 2016 through November 2017).

Unfortunately, Mayor Bass along with Trustees Hlepas-Nickell and Cope, worked in early 2017 to dismantle the established professional management of the Village and then did not provide the necessary leadership that would likely have resulted in a project which would be nearing completion right now had they not consolidated power under the mayor and fired an effective and experienced Village Manager.

Once the property was taken back by the bank, an inexperienced developer gained control of it. Mayor Bass took a course of action with that developer which resulted in them filing legal action of a lawsuit against the Village which is still pending.

Trustee Patel led the Board in a decision to use the powers of eminent domain strategically to secure a high-quality developer for the site.

The current 1860 project is using the concept plan developed by the Alliance Party’s Mayoral candidate Jesal Patel. Therefore it was fitting that he was appointed by Mayor Bass to negotiate the District 1860 project.  Patel’s experience and skill together with staff and counsel helped the Village reach an agreement with the developer which will provide millions of dollars in revenue to the Village with zero risk of loss.

Sales Taxes (see pages 105-106) are the biggest source of revenue for Lincolnwood and, unlike property taxes, they are largely paid by non-residents.

Due to outside economic factors Lincolnwood has endured reductions of as much as $1.6 million annually in Sales Taxes since the peak in 2007.

Managing our Sales Tax rates to keep pace with our neighbors as well as instituting new Use Taxes such as the food and beverage tax have allowed us to maintain service levels without raising property taxes above the consumer price index.

Retaining existing high volume sales tax producers like Loeber, Zeigler and Food For Thought, and attracting and accommodating new ones like Binny’s, Stefani Prime, and Wal-Mart is key to long-term stability.

We support and encourage development throughout Lincolnwood.

Retail zoning overlays in industrial districts on Devon and Touhy were created to allow more desire able uses to locate in these areas but to allow existing uses to remain and flourish.

This change brought new construction and new occupancy to both zones.

Supporting renovation and expansion of existing businesses is as important as new development.

Foresight and planning have been key to new development in lincolnwood. The creation of the Touhy-Lincoln TIF allowed for the assembly of lots that comprise the purple hotel site that exists today.

The creation and adoption of concept plans showing high density multi-family mid-rise residential development at the site is certainly what attracted the current developer to the site.

Trustee Patel was asked by the Mayor and Board to negotiate with the developer and school districts on the redevelopment agreement and intergovernmental agreement.

Most of the new construction development in Lincolnwood in the last 10 years has been a direct result of Alliance Party efforts and initiatives. 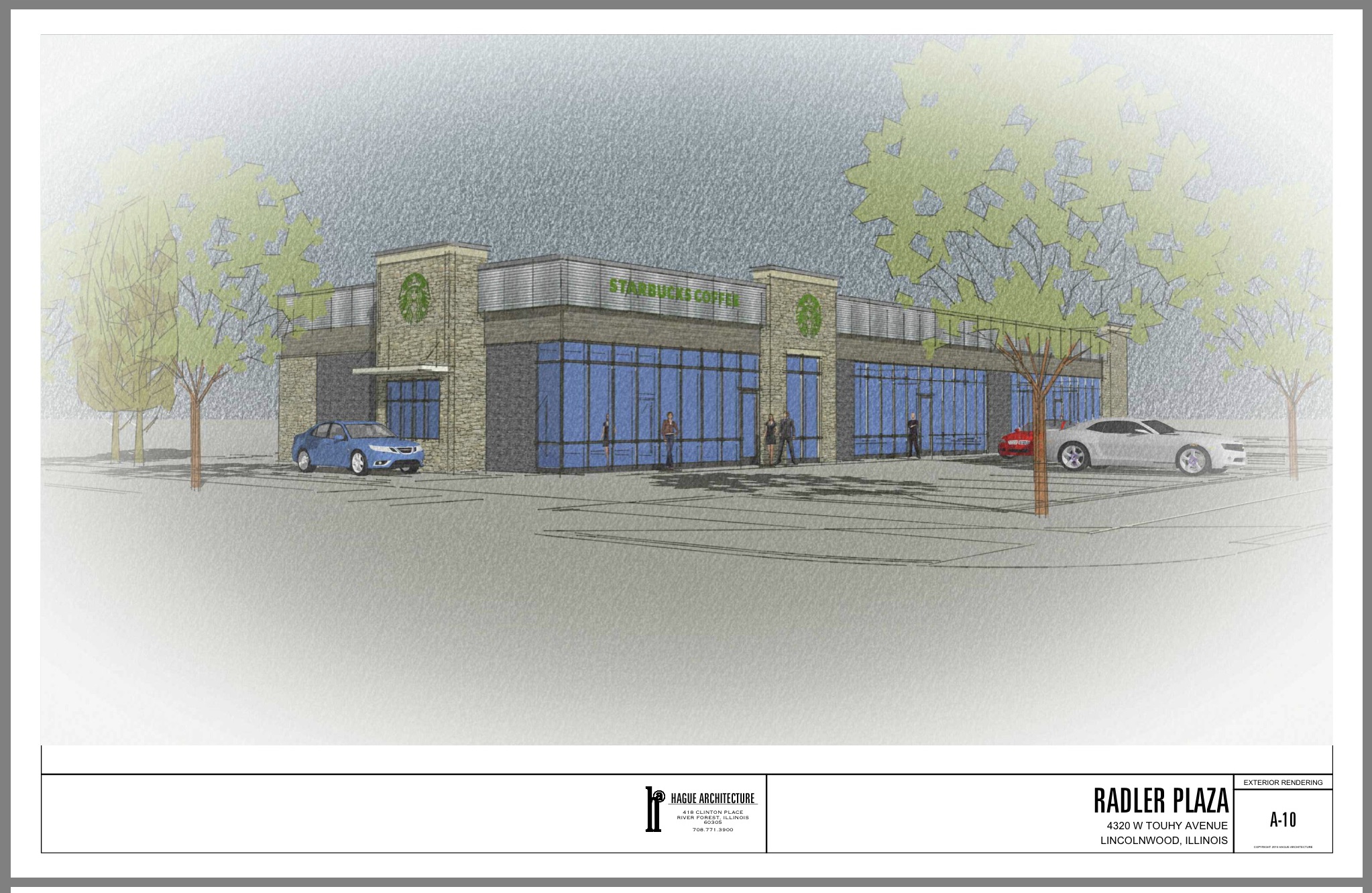